You are at:Home»Artwork»Birdless / Wingless
Title: Birdless / Wingless
Year: 2015
Medium: Doors, sensors, microphones, video loops
In August 2013 I had a dream. Birds would appear, one at a time, each one flapping their wings in flight but fixed in space. After a second or two, the wings would separate from the bird, flying up and away. The bird, wingless, falls to the ground. Another bird appears and the separation repeats. Birdless wings start to fill the sky, all flying freely, happy to be free from the encumbrance of a body. Meanwhile the birds pile up on the ground, alive and unharmed, wingless and wriggling, waiting for their wings to return.

Birdless / Wingless is a media installation offering a constructed world inspired by that dream.

A few months after the dream I created a three-channel video installation depicting the cycle of birds separating into birdless wings and wingless birds.  Shortly after its completion and showing in December 2013 I fortuitously discovered the work of Janet Cardiff and George Bures Miller.  I wanted to explore how their “musty attic” installation style might serve to frame my own work.  The result was the transformation of that video installation into a richer and more immersive media installation, Birdless / Wingless.

The installation lies behind three old doors, side by side, each lit with a bare antique light bulb overhead.  The doors are mismatched and weathered.  Although there is space between to squeeze past them, if one uses the door the loud squeak of a rusty door hinge is heard as it opens – but the sound comes not from the door hinge itself, but from a speaker mounted directly over it.  The squeak sounds normal while opening the door, but in closing the door the cacophonous squeak transforms into a melodic and tonal version of itself – an AutoTuned squeak. 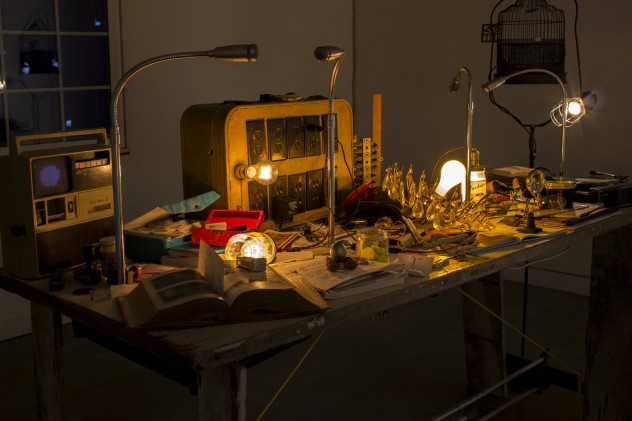 Beyond the doors is yet another door, but this one is being used as a table and is almost completely covered with a bewildering array of items.  Some are personal, such as the many bird-related drawings and a logbook.  Other items are bird-related also, such as observation books and birdsong identification records.  But the many electric items may be the most confounding of all: of the three lamps, one is an overturned chandelier, and the other two are empty food jars (of “Wren Paste” and “Whole Jackdaw in Heavy Syrup”) with light bulb sockets mounted in the lid.  They are plugged into an old suitcase with ten electric outlets installed in its side.  In front of the suitcase is a small meter labeled “Plumagetometer XL”. 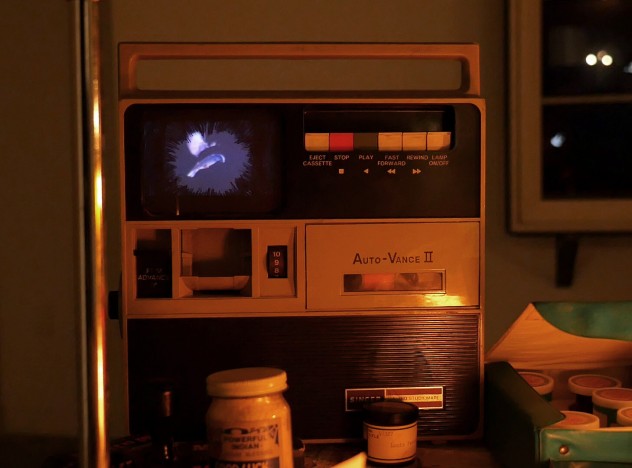 Another electric item on the table is a filmstrip viewer which shows a video.  The video depicts a sequence of birds, one by one, which flap their wings in flight yet are unmoving on a black background.  After a few wing flaps the wings detach, flying up and away from the bird’s body, which falls straight down.  Behind the filmstrip viewer and the table is a large window on the wall.  Behind the window a large video shows a black sky of birdless wings in flight.  To one side of the table is a free-standing bird cage.  Lying on its bottom tray is a third video which shows the wingless bird bodies.  Although stripped of their wings, they are clearly wiggling and alive. 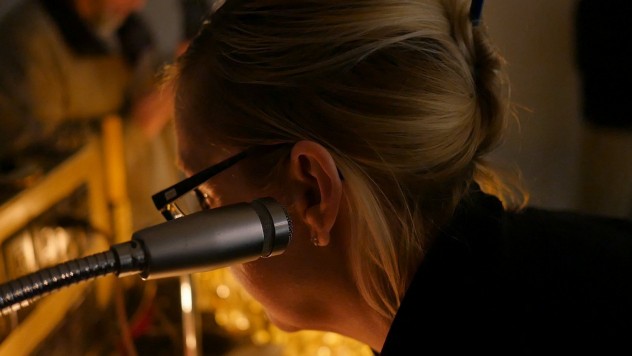 There are four microphones mounted on the horizontal door-table.  One can lightly hear some speech coming from each microphone.  By leaning in between a microphone pair one can hear a dialogue.  Each dialogue is of a man and woman discussing the phenomenon of these birds losing their wings in their neighborhood: 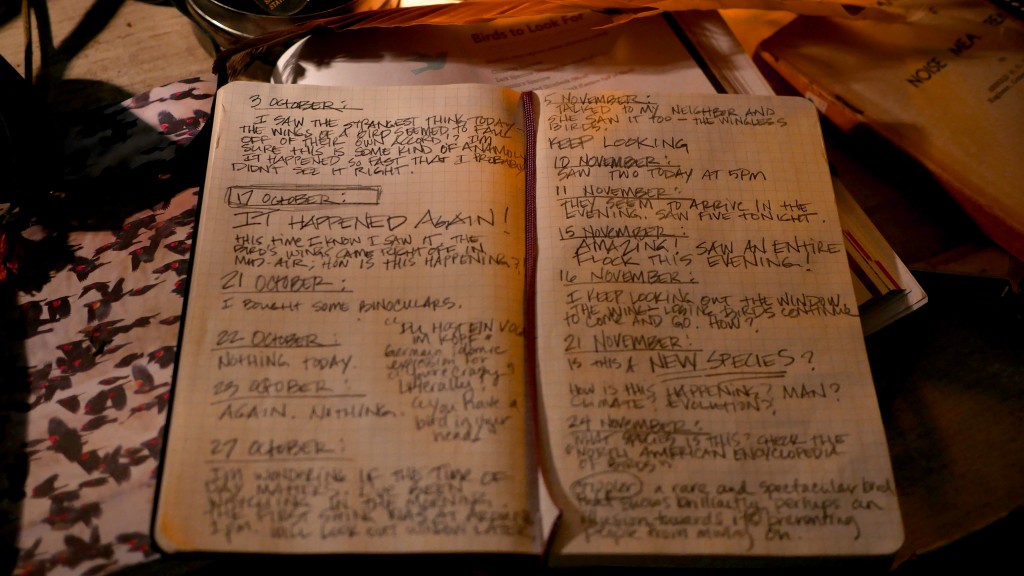 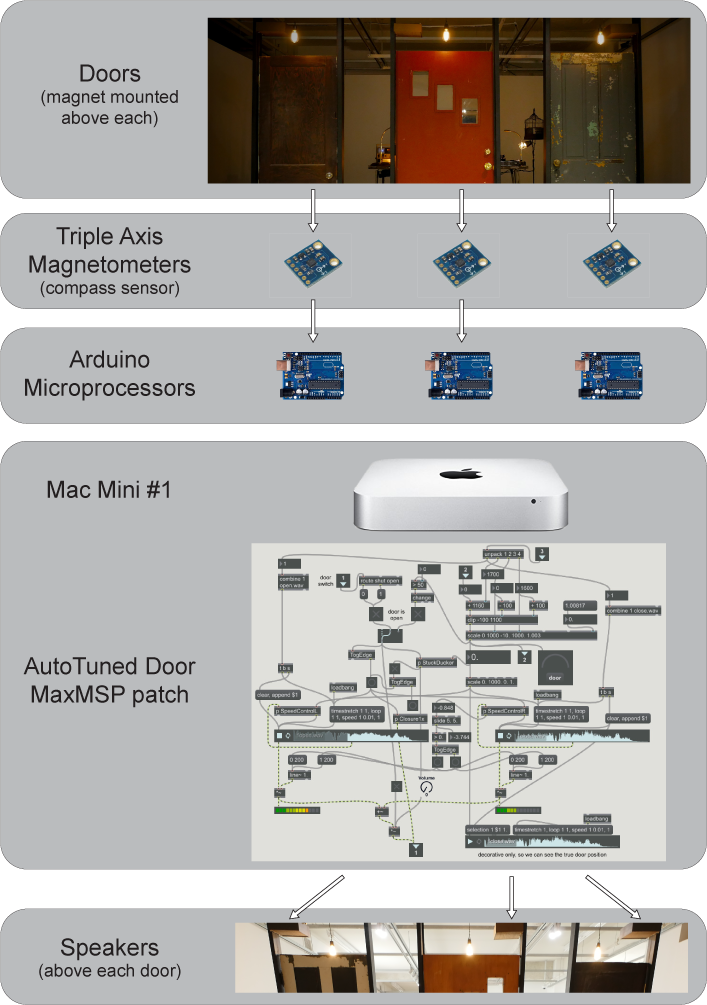 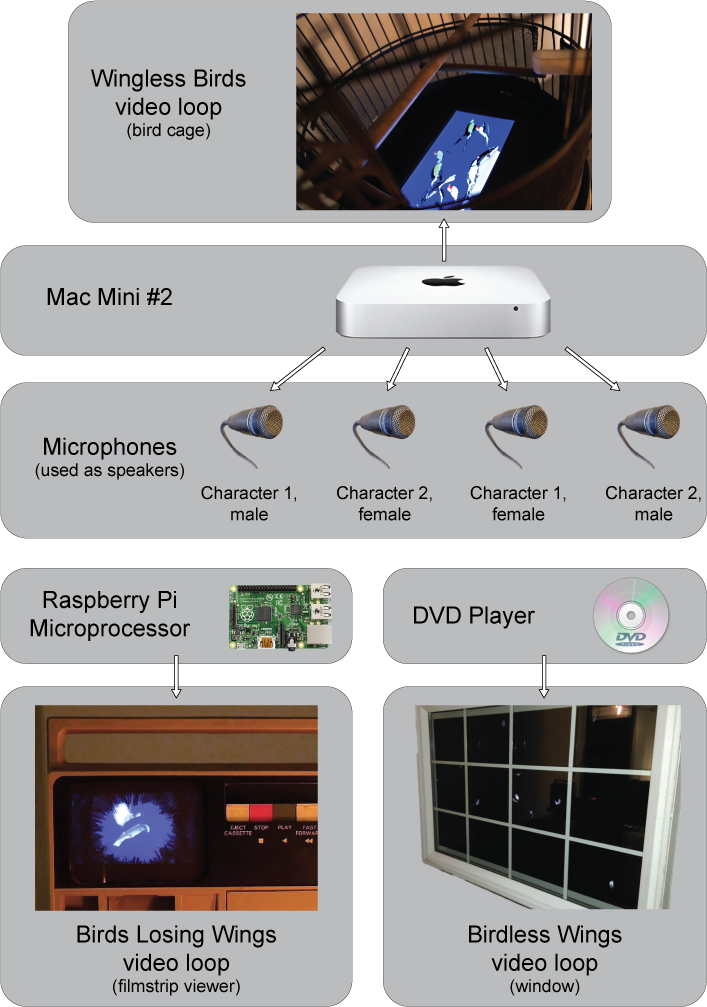